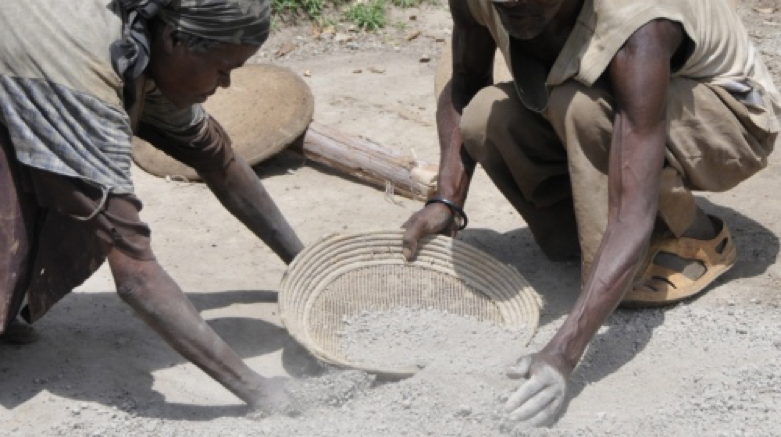 Podoconiosis is a non-infectious elephantiasis that occurs in tropical regions, such as the African highlands and Central America1,2. Podoconiosis occurs after prolonged barefoot exposure to irritant soils formed from volcanic deposits3. It is a chronic, debilitating form of non-filarial (non-parasitic) lymphoedema (leg-swelling), which evidence to date suggests is due to an irregular inflammatory reaction triggered by irritant soil particles. Over time, this results in abnormal swelling and growth of mossy nodules and lesions on the legs and feet. Recent studies have shown a genetic predisposition to the disease4. Podoconiosis is, however, entirely preventable and, if treated and managed appropriately, the effects can be significantly reduced.

I am part of the podoconiosis-research team (PRT), which is a collaboration involving medical doctors, geologists and epidemiologists, from Brighton and Sussex Medical School (BSMS; Prof Melanie Newport, Prof Gail Davey), Ethiopia (Addis Ababa University and the Armauer Hansen Research Institute), the Natural History Museum, London (Dr Javier Cuadros) and the University of Cambridge (Dr Peter Baxter). This multidisciplinary PRT is led by Dr Gail Davey and Prof Melanie Newport, who are widely regarded as the world’s leading researchers of podoconiosis (see The Lancet, 2012).

Members of the PRT collectively work together to investigate both the disease-causing agents and effects of podoconiosis, and we are united in two principle aims: to be able to effectively and efficiently treat patients with the podoconiosis, and eventually eradicate the disease altogether. In order to do this, we believe that we need to fully understand the mechanisms involved in disease onset and progression.

My role, as one of two geologists within the team, is to investigate the geochemistry of the soils in podoconiosis-endemic areas. Over the past year, I have analysed samples of soils, using a comprehensive protocol of analysis5, to identify specific components that could trigger inflammatory changes within the lymphatic system. Although preliminary, our research indicates that fine clay minerals could potentially play an important role in disease initiation6, and we have already challenged the few pre-existing hypotheses regarding the causes of podoconiosis.

We are now working in Cameroon, with Prof Samuel Wanji at the University of Buea, where we have taken over 200 soil samples and collected information on the prevalence of podoconiosis from over 80,000 people.